Earth, Wind, Fire & Water and Battle of the Bands

The third week of senior shows has proven to be a success: even with only two students displaying their artwork, the gallery was packed on opening night. 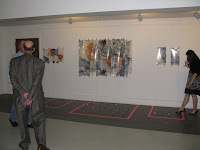 taped X’s, people gathered in line to view Holly Mahon’s layers of ink jet transparencies. Mahon’s project titled “Earth, Wind, Fire & Water” is not mounted like traditional pieces, but instead hangs inches from the wall, suspended from the ceiling by fishing wire. Many viewers were impressed with Mahon’s use of gallery space. “She uses the space between her images to her advantage,” Jessica Eastman, Mahon’s fellow senior noted. 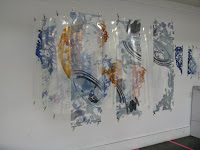 Pink duct taped boxes mark the areas where small anchors attached to the fishing wire weigh the pieces down, giving them a solid, floating look. Although the bright pink slightly clashes with the earth tones of the collection, it adds a distinct personality. Mahon was relieved that the night went so smoothly, and at the end, led a little boy to her collection and allowed him to play with some of the tiny anchors on the floor. With the night over, she didn’t her mind project becoming a bit interactive. Under her supervision, of course. 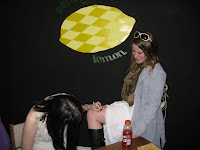 rbey’s show “Battle of the Bands – Drowning in Reverse vs. Patchwork Lemon” had the crowd laughing and hollering all night. Korbey’s alcove is painted black and the band’s logos are painted on the walls. Opening night, both bands sat under their logos, selling merchandise, signing autographs, and having pictures taken. A ballot box stood on the merch table for all guests to cast a vote for their favorite band. “It’s just like a real battle of bands – without the music,” Kelsey McCarthy, posing as a member of Drowning in Reverse, said. “We’ve got everything: the energy, the merchandise, the clothes. I’ve been signing pictures for people, even their arms and cleavage.” 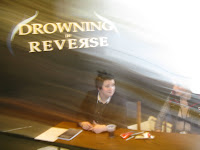 s show is very multi-layered,” Krystle Belanger, another Chester College senior, observed. Belanger noted the quality of each facet of Korbey’s project: the t-shirts, the stickers, the posters, the logos. Every detail has been covered and Korbey not only utilizes her graphic design skills professionally, but also adds a uniquely creative element.


Korbey and Mahon's work will remain up until Sunday, April 19th, but the battle is over: Patchwork Lemon won after the votes were counted at the end of the night.
Posted by Chester College Annual at 12:22 AM