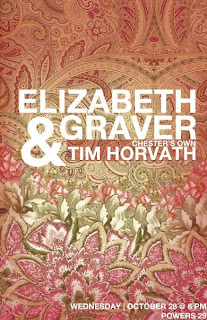 The next writer in Chester College of New England's Visiting Writers Series is Elizabeth Graver. She will be holding a question and answer session with students from 2- 3 p.m. in Powers 29 on October 28. Later that evening, she will give a reading at 6 p.m., also in Powers 29. Chester College's own Tim Horvath, a member of the Writing and Literature faculty, will open. The reading is free and open to the public.

Graver was born in Los Angeles, California in 1964. She has written three novels, as well as a short story collection, titled Have You Seen Me?, which won the Drue Heinz Literature Prize in 1991. Much of her work has been seen in several anthologies, including Best American Short Stories, Prize Stories: The O. Henry Awards, The Pushcart Prize Anthology, and Best American Essays. One of her stories, “The Mourning Door,” won her the Cohen Prize from the Ploughshare Magazine. She currently is at Boston College, teaching Creative Writing.
Posted by Chester College Annual at 11:10 AM