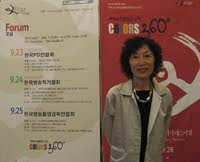 With initial training as an architect, Christine Choy understands the unique framework of film making. Her documentary-style works have captivated audiences on a global-scale as well as garnering her multiple citations from the Sundance community. Her 1987 film "Who Killed Vincent Chin?", a chronicling of the real-life tragedy that took Japan by storm, swept critics and viewers, ultimately earning her an Academy Award nomination. She presents at Chester College of New England on October 27th at 2:30pm in the Wadleigh Conference Room as part of the Visiting Artist Symposium. She will share from her experiences as an artist. Admission is free and open to the public.
Posted by Chester College Annual at 11:08 AM