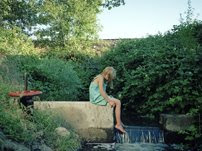 Photographer Pipo Nguyen-duy will round out the 2008 Visiting Artist Symposium Lecture Series with a lecture at 2:30 p.m., Tuesday, November 18 in the Wadleigh Library conference room. The event is free and open to the public.
Nguyen-duy was born in 1962 in Hue, Vietnam. Growing up within thirty kilometers of the demilitarized zone of the 18th Parallel, he describes hearing gunfire every day of his early life. In 1975 he immigrated to the United States.
Nguyen-duy has taken on many things in life in pursuit of his diverse interests. As teenager in Vietnam, he competed as national athlete in table tennis. In 1983 he earned a Bachelor of Arts degree in economics at Carleton College, a liberal arts college in Minnesota. He then moved to New York City, where he worked as a bartender and later as club manager. While living in the East Village, or as Nguyen-duy describes, “the crux of creativity in New York,” and meeting people such as Don Cherry and Keith Haring, Nguyen-duy’s interests turned to art. Before devoting himself to the study of fine arts, Nguyen-duy spent several years in the late 1980s living as a monk in Northern India. In 1992 he earned a Master of Arts in Photography, followed by a Master of Fine Arts in Photography in 1995, both from the University of New Mexico at Albuquerque.
Nguyen-duy has received many awards and grants, including the Artist’s Angel Award from the Vermont Studio Center in Johnson, Vermont; an En Foco Grant; a fellowship from the Oregon Arts Commission in Salem, Oregon; a B. Wade and Jane B. White Fellowship in the Humanities at Oberlin College; and an Individual Artists Fellowship from the Ohio Arts Council in Columbus, Ohio. He completed an artist residency in Giverny, France in 1998 and at the Headlands Center for the Arts in Sausalito, California. He participated in Light Work’s Artist-in-Residence program in 2004.
Among other venues, his work has been exhibited at the Allen Memorial Art Museum in Oberlin, Ohio; Elizabeth Leach Gallery, Portland, Oregon; Wooster Art Museum in Wooster, Ohio; SPACES in Cleveland, Ohio; Camerawork in San Francisco, The Bronx Museum in New York;Center for Exploratory and Perceptual Art in Buffalo, New York; Faaborg Museum in Denmark; and The Museum of Photographic Arts in San Diego.
Nguyen-duy teaches at Oberlin College in Oberlin, Ohio. When not teaching, he lives in Ashland, Oregon with his wife and two sons.
Posted by Chester College Annual at 2:39 PM