Chester College of New England’s Visiting Writers Series will host a reading by Alexandria Peary at 6 p.m., Wednesday, March 4 in Powers 29. Admission is free for students with ID and a $5 suggested donation for all others.

Peary writes and publishes in a range of genre including poetry, magazine writing/ creative nonfiction, and scholarly writing. Her first book of poems, Fall Foliage Called Bathers & Dancers, was published in September 2008. Her poems have appeared in journals including The Gettysburg Review, The Massachusetts Review, jubilat, Poetry Northwest, Verse, and Crazyhorse, has received the Joseph Langland Award from the Academy of American Poets and has been nominated for a Pushcart Prize. Her most recent magazine article was published in late 2008 in the parenting magazine Brain, Child. 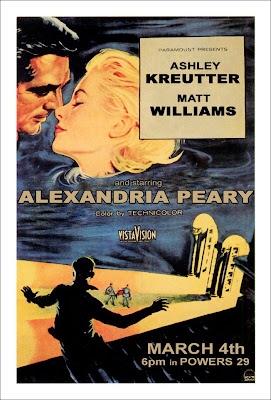 Junior Matt Williams and sophomore Ashley Kreutter will be opening for Peary.

excerpt from "i beg for rationalization"
by Matt Williams

san francisco. i have pieced this memory together
from the shreds of old photographs i found in carpet
strands in my room. this was before his mouth could
learn syllables and we understood each other, mystic
symbiosis – varied synaptic impulses charted us
guidelines to understand simply, we were brothers.
there was a spill of translucence on his brow,
and on mine, like a halo? like a white golden swathe.

Posted by Chester College Annual at 11:35 AM